This lecture will highlight recent research on the armament of ships from around 1480 to the 1520s. It is becoming clear that shipboard artillery developed significantly around 1500 – changing from essentially short-range, anti-personnel weapons to larger, longer-range cannon which could do significant damage to ship structures. Piecing the overall story together is, however, not simple and entails research into a number of different sources. Finds from shipwrecks are one of the major contributors to our knowledge and three Scandinavian wrecks have been crucial pieces of the jigsaw – the Anholt wrecks now in the War Museum in Copenhagen, the Riddarholm wreck in Stockholm and the Gribshunden. This talk will outline the developments that took place around this time.

Now retired, Kay worked for nearly 30 years at the Royal Armouries in the UK where she was Head of Conservation. She began researching early artillery in the 1980s, concentrating on cannon made before 1600 and, more recently, she has carried out work on the early history of blackpowder. In 2001 she helped set up the Ho Group in Denmark and has conducted a series of experimental archaeological programmes in an attempt to further understand early guns and gunpowder. She helped found the Ordnance Society in the UK in 1988 and was for many years, the Ordnance Society Journal editor. She has published widely on many aspects of early artillery and is currently working on a book about the history of cannon from the beginning of the 14th century to c. 1600. 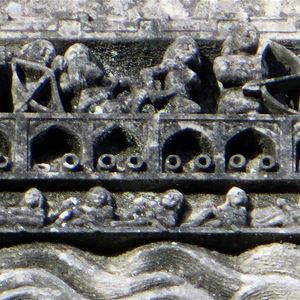